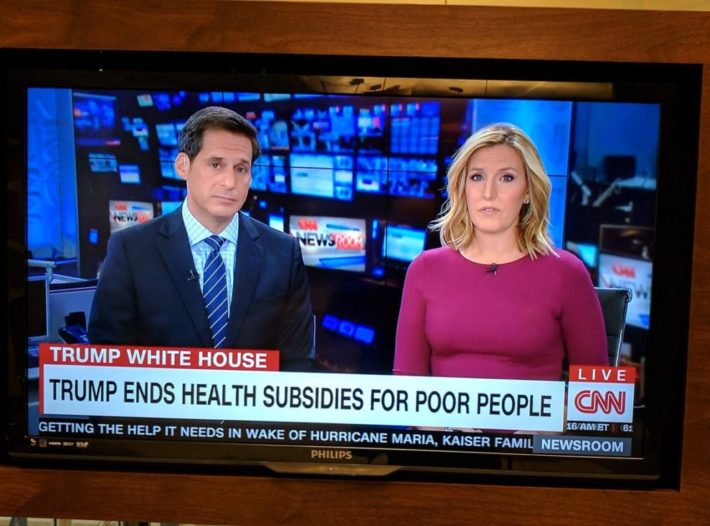 The White House has ended the unconstitutional subsidy payments of Obamacare.
The uninformed but emphatic CNN (and its ratings driven endlessly exasperated peers) consumers are accusing the president of “sabotaging” the Affordable Care Act. But it is Obamacare that is killing Obamacare.
All the panicked tirades of assorted bunches of #NeverTrump that feared he could maneuver into a dictatorship are now driving in reverse, they bellow that some dictatorships are good. Trump should ignore the judicial ruling just this one time, cos, you know, that’s what a benevolent dictator should do.
Following the law as written is once again a crime against the law. Nothing is more emblematic of this than the implementation of so-called “cost sharing reduction” payments, also called CSR subsidies, which are direct payments to insurance companies that were designed to hide the true cost of Obamacare by shifting cost to taxpayers while bribing insurance giants to participate in the law’s exchanges.
Bribes come in many form and ObamaCare’s corporate sympathizers are getting theirs, that’s the wonderfulness of not having passed a Federal budget in every year of Obama’s presidency, lot of money gets moved from one wallet to another without a receipt.
Shortly after the passage of Obamacare, the Obama administration realized that it would need these subsidies and asked for an appropriation from Congress in 2013. When Congress refused, Obama’s Treasury Secretary Jack Lew, without offering any public legal justification for the move, ordered the administration to begin making CSR payments. Perhaps sometimes a dictatorship is good?
Since Lew’s decision to unilaterally create a massive new appropriation, Obama (and now Trump) have been sending around $7 billion each year to insurance companies participating in the supposedly self-sufficient and competitive state healthcare exchanges. They continued to do so after the House sued. They continued to do so after a federal judge found the payments unconstitutional and ordered them stopped.
“Congress authorized reduced cost-sharing but did not appropriate monies for it,”. “Congress is the only source for such an appropriation, and no public money can be spent without one.” – U.S. District Court Judge Rosemary Collyer
The Trump White House now says that based on guidance from the Justice Department, the “Department of Health and Human Services has concluded that there is no appropriation for cost-sharing reduction payments to insurance companies under Obamacare.” Those meddlesome unconstitutional acts are hard to defend without more dictatorship. a relieved nation should be thanking Trump, profusely.
“By complying with the law and the Constitution to end the payments, President Trump actually diminished his executive power and ability to act unilaterally—restoring a rightful balance of power between the branches.” – healthcare policy expert Chris Jacobs
It’s worth noting that the price of insurance for Obamacare consumers will not change because of the president’s actions. Trump is stopping illegal payments to health insurance companies, not altering a word of Obamacare.
If you need insurance company bribes disguised as health care subsidies to keep your fabricated exchanges functioning, then perhaps you don’t have a law that’s worth saving. Plus, insurers began fleeing Obamacare “markets” long before Trump was ever elected. The collapse of the individual market was predictable, and ongoing. Even when everyone assumed Hillary Clinton would be president, a Kaiser Family Foundation study estimated that over 664 counties in the U.S. would feature only a single insurer on Obamacare exchanges in 2017.
President Trump should ended these illegal subsidies immediately rather than waiting ten months to do so and having to argue against the largess of politicians. Now the move looks like an act of negotiation leverage. Whatever the president’s reasoning, however, it’s good news for those who genuinely care about process and the most basic workings of the Constitution. If you don’t like it, write a better law.
But don’t beg for a sometimes dictatorship…