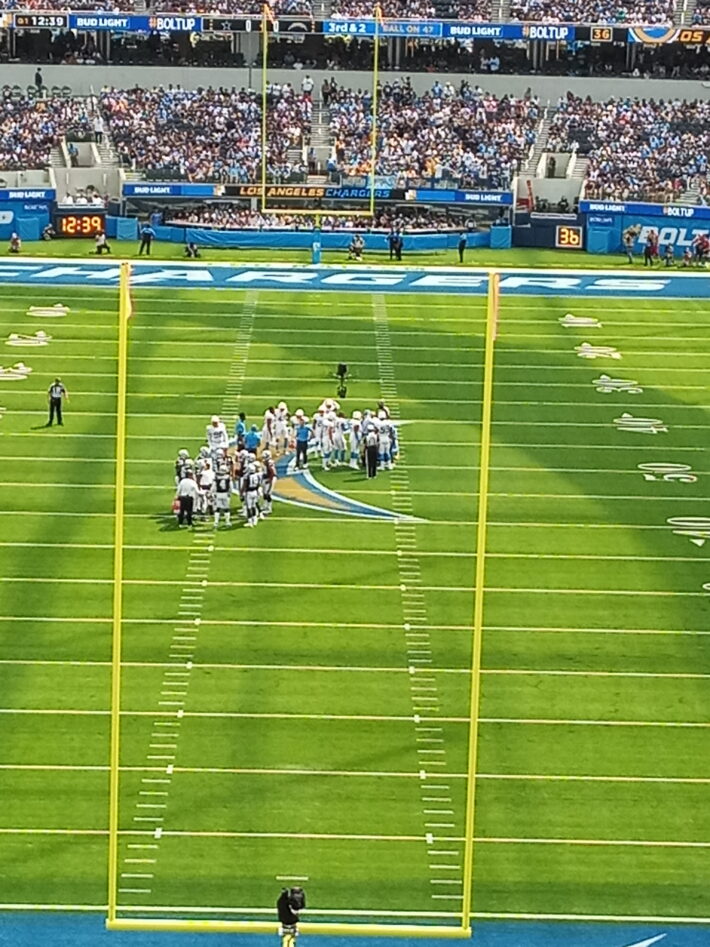 What comes before thunder? You might ask? Well if you were either in attendance or watching Monday Night Football you would know its lightning. After some much needed precipitation the powers that be decided that some lightning was in order in the Inglewood area on Monday night.

A fortyfive minute delay was called and the teams made there way back into the lockerooms and waited. althought the lightning outside had subsided, it was just getting started inside of Sofi. Starting of to a roaring start offensively, and holding the raiders to punts the entire first half the Chargers working in full stride against there division rival.

The Raiders came into this divisional matchup going undefeated. The Chargers just coming off of a monstrous victory against the cheifs in arrowhead, everyone knew this game was going to be a clash of titans. Up until that first touchdown by the raiders it was looking like a one sided battle. The Chargers secondary had been doing an amazing job. Holding Derrick Carr to under 60 yards of passing yards in the first half. Now lets not forget that this is the QB that through the first 3 games had already accumulated 1100 passing yards. Yet the Chargers were able to keep him under 200 yards passing by the end of the game. On the run stopping aspect of the defense the Chargers were able to hold a healthy Josh Jacobs to only 40 yards with 13 attempts.

This Charger team is here to tell you that they are the real deal. With the addition of Staley whos seems to have no limit on gutsy 4th down calls, its a night and day comparison to the previous coaches methods. This riskyness is paying back huge divedent and were all looking at a superbowl caliber team

A massive win that takes the Chargers to the top of the AFC west with a 3-1 record. set to stay home this shortened week to get ready for the next home game against a formidable browns defense. This Sunday even though its pressed for great weather dont be surprised if you hear about more thunder going on in Inglewood.

Now before ending this article i want to address something that has realy been bothering alot of Charger fans. I dont know where the narrative started that the Chargers fans arnt showing up to the games but trust me we out here! Multiple journalists (who mind you arnt seeing these games live) are watching at home and then making assumptions on what the ratios are of the Chargers fans in attendance.

As someone who is a season ticket holder and is in attendance every game i can tell you the ratio at the cowboys game was 40%. Chargers fans and the raiders game was being portayed as “blacked out” in reality just a little under 50/50. I dont know what the networks were showing, but super fan @Bananabolt00 on Facebook even has a video to prove that without question.

We are here , the players hear us, and we love this team, Boltup!