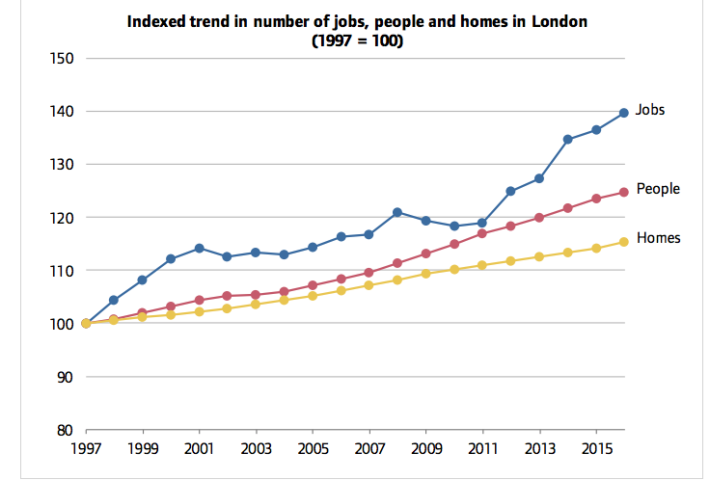 Oxford Economics’s Ian Mulheirn writes that London’s housing market isn’t expensive because of a lack of building, and building more wouldn’t lower prices. I disagree.
Claim one: housebuilding has outstripped household formation, so if anything we have a surplus of housing.
Household formation is “endogenous” – it is determined, to some extent, by housing availability. My flatmate and I count as a single household, even though we might prefer, if we could afford it, to live separately. A young person who wants to leave home (creating a new household) may not be able to do so because it’s too expensive. A household might not be able to move to London at all if housing costs are too high.

What if we look at something other than households? This chart (hat tip to Daniel Farey-Jones for it) comes from the GLA’s excellent Housing In London report and shows that in the last two decades the number of jobs in London has grown by 40% and the number of people by 25%, but the number of homes by only 15%. (I suspect this figure is also partially endogenous – more people would live in London if it was cheaper to rent or buy.) People-per-dwelling in London has been rising since the mid-1990s and the share of 20-34 year olds living with their parents in London has risen from 17% in the late 1990s to 23% today.
So it looks as if there is something to this endogeneity point. Since the first half of Mulheirn’s argument rests on household numbers being independent of house numbers, I think it’s wrong.
Claim two: house price rises cannot be blamed on insufficient supply because rents did not rise by anything like the same rate.
Here Mulheirn is on firmer ground. Because house prices reflect their value as an investment as well as their value as a place to live, simple supply and demand views may be misleading. Rents, which only reflect the value of somewhere as a place to live, are a better reflection of supply and demand dynamics than house prices.
Low real interest rates are probably a better explanation for the recent rise in house prices than a sudden change to supply and demand fundamentals is. Ben Southwood explains why here, but basically if the expected return from other investments falls, the value of housing rises as it becomes a relatively more profitable investment.
But there are two things to say about this. One, the fact that rents have not risen much in London since 2005 does not show that there is no shortage of houses in London. Rents may have been very expensive already back in 2005, and by international standards it certainly looks that way – London is one of the most expensive cities in the world as rents go.
Mulheirn does not ask why housing is such an important investment good in the first place. We don’t expect the price of other durable goods like airplanes or cars to rise when interest rates fall, because the supply of those things is relatively elastic so if the demand for them goes up due to cheaper borrowing, people simply meet that demand by making more of them. “Investing” in a car doesn’t make sense unless that car cannot be easily made in the future – so classic cars, yes, but 2017 Toyotas, no.
Not so with houses. The supply of houses, like gold or fine art, has become so inelastic that houses now do have a huge investment element to them. You want somewhere secure to live permanently? Sorry, you have to also invest in a hugely valuable financial asset that might rise or fall by 10% in value in the space of a year, producing a deposit for that and paying the interest on a loan to cover the costs.
This is why building more homes would cut prices, even though recent price rises may not be caused by a fall in building rates. The price of housing-as-investment is determined by two blades of the scissors – both interest rates and tenancy rules acting as one blade, and inelastic supply acting as the other. Let supply respond to demand and housing stops being a useful investment asset.
In a footnote, Mulherin makes a third point:
Incidentally, it’s pretty much impossible to make a case that purely regional supply shortages can explain a boom in national prices in the absence of a national supply shortage. If there’s no shortage nationally then any growing demand in London, say, must come at the expense of falling demand elsewhere leaving average prices unchanged.
This is a very weird point and is obviously wrong. We don’t have a fixed amount of money to spend on housing nationally – we can raise our earnings by moving to different places, and we can shift expenditure from other things to pay for more desirable housing. If housing supply was entirely fixed in London then any rise in wages here would result in a rise in rents paid, without any money being shifted away from elsewhere.
It’s difficult to understand what model he’s using in his head – what does he think would happen to prices if we allowed many more houses to be built? Where does he think house prices come from? It’s not clear how his points join up in his own argument. For me, though I admire Mulheirn’s contrarianism, I don’t think the case is made. Building more houses is still the best way of cutting housing costs that we’ve got.