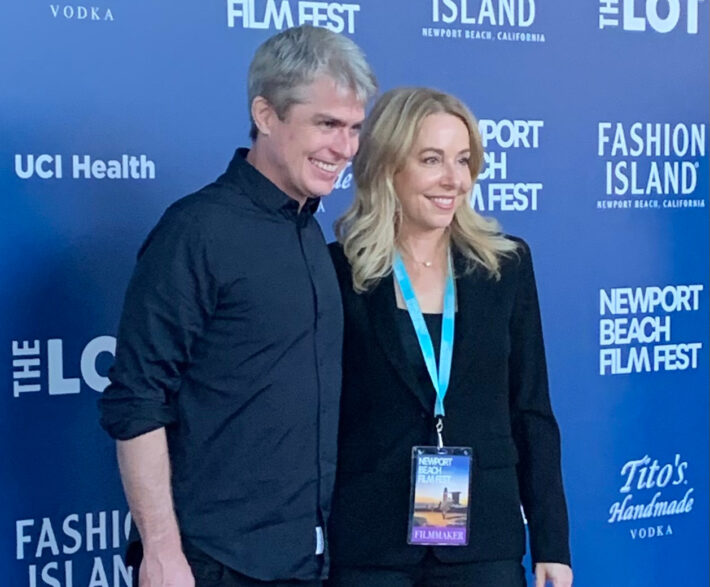 When people first started making movies, all films were “short.” Sometimes running less than a minute. Flashforward to the film industry 2021, you’ll find some of the best short films screened on the film festival circuit. If you are an aspiring filmmaker, creating a short film and submitting it to festivals is also great way to show your skill of storytelling. Even the Academy for Motion Pictures has a Short Film category that wins an Oscar every year.

That’s why we want to tell you about “Wichita” a short film created by two (now) Angelenos just featured in the Newport Beach Film Festival. “Wichita” is the directorial debut for Sergine Dumais, written and produced by Bo Price, and starring Maxim Roy and Jeremy Sisto.

Question: What is “Wichita’s” Logline?

Answer: How fast would you run to save your marriage?

Synopsis:  Wichita tells the story of a woman, Sarah, who receives an unexpected phone call from her husband while in the arms of her lover. It’s a wild and humorous race-against-the-clock as Sarah races to get home in an attempt to save her marriage.

Question: Bo, how long did it take you to write the script?

Bo Price: A couple of hours was really all it took to write the first draft. Then it was revised a little bit and then we kind of kept revising it as we went. But the bulk of it was written very quickly. And it was honestly, a happy fluke accident in some ways.

Question: Sergine, “Wichita” is your directorial debut in film, after a career in theater, how did you make that transition?

Sergine Dumais:  I took the time and got the help that I needed in the areas where I was not as experienced. Then I realized, it’s just adapting. It’s like if you’re a dancer and you’re going to try a different style of dancing that you’ve never tried before it’s OK. You’re going to be ok. So I would say to people “You know more than you think” especially if you have experience in theater it’s very relevant. And if you have the right people around you the transition is not too scary.

Bo Price: For a short to really work it has to be like a mouse trap – a big set up and a quick payoff.  There just are not that many scenarios (in my experience) that really lend themselves to that kind of formula. I was grateful this one turned out the way that it did and even more grateful that Sergine saw the potential in it. I had it written and wasn’t doing anything with it, and I wouldn’t have, if not for her picking it.

Question: Even though your film is programmed in the “drama” section ‘Wichita’ also wins  awards for “Best Comedy”?

Sergine Dumais: I love how people react to it completely differently. Certain festivals put us in a drama category while other festivals give us the “Best Comedy” award. Some people say “Oh, there’s a big lesson in this”. I don’t necessarily see a lesson but some people do and that’s great.

Question: What is it like when you start hearing from the film festivals that your short film has been selected?

Bo Price: Well, it’s  very fun. It’s a great, GREAT feeling. It’s hard to get into any festival. There are so many shorts made and even if you make something that’s very well done it’s sometimes it’s hard to connect. So to get accepted is very flattering and for me it was very exhilarating.

Sergine Dumais: I have to say, I was not surprised when Maxim Roy (Sarah) started winning awards for ‘Best Actress’. I mean she’s amazing and it’s such a wonderful part because she gets to do everything in 5 minutes. Then, when we started winning more awards and won “Best Short  Comedy“ at the Monte Carlo Film Festival, and I was like, what?

I was really feeling grateful that I got to be on such a wonderful team and experience that. It was really a genius script from Bo, and the cast, and cinematographer. So on one hand it’s hard to believe,  but then,  you look at your team and see “I just got so lucky to work with these people.” So I am just so grateful.

Question: Do you have advice to other filmmakers interested in making a short film?

Bo Price: If people really want to make a short film then they should go for it. I mean it’s going to take everything out of you. You should only do it if you’re really just dying to do it. Because it’s so hard, and time consuming, and gets expensive, and everything else. And because there’s really no financial reward for it, you really have to do it simply because you love doing it. And it’s possible that it could lead to something else, but, I think if that’s all you’re doing it for it’s probably going to be unsatisfying. You have to just love it, in and of itself.

Sergine Dumais: This is my first film so I think this is the perfect way to get started. I really like the short form genre even though it’s not something you would pursue for money. I think it’s worth it for the love of the art form itself. It can lead to a feature length film and I’m really excited about that.  But I think a short film itself is something worth doing and I would absolutely do it again.

Question: Can you share some behind the scene highlights or funny moments while making the film?

Bo Price: I grew up in Wichita, Kansas in the 80’s. Hearing an actor of Jeremy Sisto’s caliber talk about Pizza Hut and Cow Town? I was like, no matter what happens in this life it’s not going to get more fun (for me) then this moment right here. For me it was exhilarating. (laughs)

Sergine Dumais: For one second, we had a problem with the actor (playing Sarah’s lover)  and I turned to Bo and said “You know if we can’t find anybody it’s going to have to be YOU in there” and he was like “Oh my God!” There was a split second where he was going to have to “take one for the team.” (laughs)

Bo Price: Yeahhhhh the actor that is in the scene, he has the abs and the chest for that. I don’t know what you would have done. I would have been wearing a t-shirt! I’m just glad it didn’t come to that.

“Wichita” has been screened at over 60 film festivals and won over 25 awards worldwide.

“Wichita” has been purchased by Canal+ the French premium television channel. Currently, the filmmakers are developing it into a feature film. For more information go to WichitaFilm.com

** This interview is an excerpt from a conversation with filmmakers Sergine Dumais and Bo Price after the Newport Beach Film Festival.